Whoa! Now, how's that for drama? And even more importantly, how's that for believability? I've said it before and I'll say it again: The number one reason people don't buy from you is they don't want what you are selling. But, the number two reason is...

They Don't Believe You!

Strive for believability. It is supremely important.

But, that wasn't Mr. Brekke's only good idea. No, sir. He also offered to buy the car back from you if maintained properly because, in fact, he really didn't want to sell it. And that's why, of course, he was also offering $1,214 worth of free maintenance while you drove the car so...

It Would Be In Great Condition
When It Was Time To Buy It Back!

He also was the only contestant to think to send a "follow up" letter and, in this pitch, he went on to explain how his situation was even more dire because now the IRS was threatening to seize his property. And this time he included (in the proverbial sealed envelope) the United States Seizure Notice! See below: 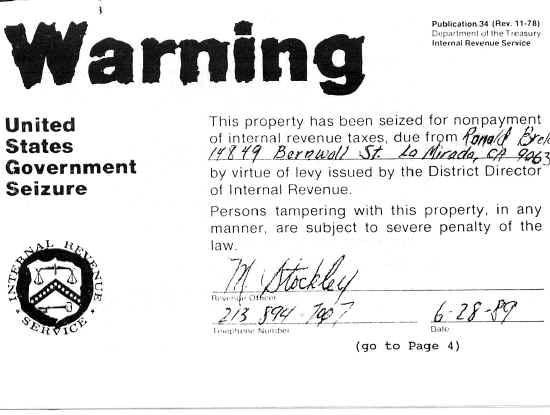 And that's not all. He also sent a reprint of a Reader's Digest article on "How You Can Save on Car Insurance" which explains "six easy ways to lower your premiums and still get the protection you need." (Like maybe buying a car like Mr. Brekke's?)

He also offered a premium for the first 10 people who stopped to look at his car. The premium was a booklet titled, "18 Major Health Discoveries to Add 10 Years to Your Life".

Like I said, Mr. Brekke did not win because this was a copywriting contest but he did such a fantastic job I've decided to give him a nice prize anyway!

More good stuff. From Travis McFee, D.D.S. in Salem, Oregon. He explains he'll sell his Chevy Caprice at below Kelly Blue Book wholesale because he can't trade it in because he (and a group of professionals) are banding together to buy a bunch of Mercedes wholesale direct from Germany. And then...

He Invites You To Get In On
That Action If You Don't Want The Caprice!

And here's a good reason for responding now to the P.S. of the sales letter written by Martin Choy...

So why does Trapper John, M.D. (sounds like a TV show, doesn't it?) say he is offering such a good deal on a new luxury pick-up? Simply because...

Here's another good idea for getting action now from the P.S. of the letter written by Kevin Brandes. Kevin offers as a premium a free trip to the Indy 500 (he's selling a Corvette) and his P.S. says:

A really well-written ad (from a copywriting point-of-view) was sent in by Lynn Stratford. Lynn is selling a 1950 Studebaker (I wonder if it's blue and white like the one my Dad had?) and he makes some very good points including:

This one is really a rock-solid, exceptional piece of work but it irritates me because now I'm seriously thinking about buying this car myself!

David C. Smith of Laguna Beach sent in a good letter to sell his 450 SLC Mercedes that comes complete with...

You know, I can hardly imagine I would ever want to own a Gremlin but the sales letter written by Robert Robinson in Washington, DC really had me on the ropes. This letter is a borderline masterpiece and by the time he's done you really do wonder why he's willing to sell it! Here's how he explains it:

Don Brown, a preacher from Kerman, California did an excellent job writing his letter and he's one of only two of my subscribers who thought to include a photo of the vehicle (station wagon) he wants to sell.

Why didn't the rest of you think to do this?

Here's a sample of some of the excellent copywriting done by Danny Van Meter of Klamath Falls, Oregon: (Klamath Falls?)

Linwood Austin of Santa Barbara, California is the only contestant who used a particularly valuable ploy which I've always found to be useful: "...if you are not going to take advantage of this offer, call me to let me know. Then I will feel free to offer it to one of the other rental companies..."

One of the best letters of all was submitted by Nina Harper of Long Beach, California:

Look, I'm running out of space and I want to reproduce the winning letter before I close. However, I would like to at least acknowledge some of the other entries that were very, very good. One of them came from Mark W. Goggin who owns Golden State Envelope in Los Angeles. (By the way, I highly recommend him if you need to buy envelopes and his number is 213/461-3044.)

And the winner is...

But wait! Before I tell you I want to make an observation. It seems to me that, often, the people who had the most writing ability did not come across as sincere as some of the letter writers with less facility. Some of the letters were well-written but "cute". And, they were tarnished by an obvious attempt to be clever.

Enough of that. Now, in my judgment, the best letter of all was submitted by a guy from Kirkland, Oregon named:

His headline is virtually irresistible and his copy, although short, is absolutely compelling! And, I tell you, whoever is in charge of marketing this new car is a fool if they don't hire this man. Here's his letter:

Great job, Don! We'll be contacting you soon about your prize and, I want you to know, you've won out over some monstrously stiff competition.

Oh, and there's just one more thing. Listen, you klutz: You sent your letter in handwritten which means it almost didn't get read.

Don't do that ever again, Don. It is truly hiding your flame under a basket. It's like Rachael Welsh wearing a mu-mu.


"The Teacher of Titans"

I have doubts. Maybe Don shouldn't have won. Maybe I should've given first prize to another entry which you will find by clicking on the link below.  Read it and tell me what you think.

Next month's letter will be something I've been working on for a long time. It'll probably be the most useful letter I'll ever write. It's one you'll want to keep with you all the time and to use constantly as a money-making tool extraordinaire!